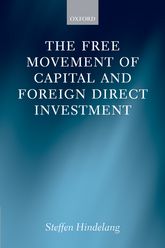 The scope of protection offered to foreign investors by EU law has become a matter of intense political debate. Neo-protectionist policies are on the rise within EU Member States, who are struggling to acclimatise to increasing inward direct investment from developing countries. Strict regulations are being implemented to control the flow of this investment, undermining the principle of free movement of capital. Are such policies permitted under EU law? What impact does EU law have on foreign direct investment? This book addresses these questions through a coherent doctrinal reconstruction of the EC Treaty provisions on free movement of capital in a third country context.